Charles (Eddie) Handlin entered the Navy in the spring of 1943 and went to basic training/boot camp in New York. He was assigned to the USS Ashtabula, which was commissioned on August 7, 1943. Ironically, the name of the ship also corresponds to the name of a river and county in Ohio directly adjacent to where he lived. I feel this was meant to be and part of a greater design.

I was not fortunate enough to meet my grandfather, as he passed way a couple of years before I was born, but one of the stories my grandma always tells is about how Eddie was a goofball and was notorious for sun tanning on the deck during off-duty times. One of these times he fell asleep and was burned badly, so the whole ship gave him a hard time.

Families of World War II Veterans means a lot to me for many reasons, but mainly because the more I learn about my grandfather's service and his role in the war, the more I am humbled and honored for the time he sacrificed not only for his country but for our family as well. I feel that this historic time of our country is getting lost in today's education system and I love how this charity helps bring it back to the forefront for children, grandchildren and others to learn about what their family members did and went through in order to protect this country. His legacy has continued to live through my two uncles who both joined the service during the Vietnam War because of his experiences and passion toward protecting this country. I am incredibly honored to be a part of this family and to see his lasting impression still exist at family functions and the holidays. 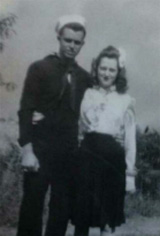